The first meeting of the Sunset District Improvement Club probably didn’t go as its organizers intended. Although the neighborhood association quickly became an influential voice in city politics, history suggests that it was borne from controversy and neighborhood discord.

In 1895, the Sunset District was lacking in population and political clout. The Sunset Tunnel wouldn’t open until 1928, and the growing population west of Twin Peaks and south of the dairy farms in the Haight had two pressing demands: creation of a networked sewage system, and improved streetcar service to connect them to downtown. According to local history archive Outside Lands, the new club needed a name to set itself apart from the “already established South Side Improvement Club, which was made up of absentee millionaire real estate speculators and land developers.”

Organizers of the meeting put their best face forward: the La Grande Hall at the corner of H Street (Lincoln Way in 2015) and 9th Avenue “had been newly whitewashed and adorned with flags, bunting and magic-lanterns,” reported the September 1 San Francisco Call. “Attendance was not large, despite the fact that about 800 invitations were issued and a special train provided.” In all, the four-car train carried only 14 passengers.

Club president W.H Jones introduced Sunset resident Thomas U. Sweeney to explain his “plan for sewering this district,” but Sweeney wasn’t in the room. A committee appointed to retrieve him “returned in a few minutes and reported that Mr. Sweeney had gone to bed and refused to get up.”

George T. Gaden, a representative of Mayor Adolph Sutro, tried to speak up, but was shouted down by Jones, who ruled him out of order. Gaden pressed on, which led Jones to preemptively adjourn the meeting, shouting “that there should be no discussion of the railroad question while he presided.”

Gaden kept gabbing about the railroad question, “a cause of bad feeling between the Ashbury Heights and Sunset Valley people.” The conflict? Sunset Valley compromised with streetcar operator Southern Pacific to run cars every half-hour, but the Ashbury contingent “had stood for 15 minutes’ car service.”

By June of the following year, the Sunset Improvement Club had established itself; the June 27, 1896 edition of The Call reports that the association was back at the La Grande Hall celebrating a big win: the Board of Supervisors appropriated $11,000 (about $308,000 in 2015 dollars) to grade the district “bounded by H and D Streets (Lincoln and Fulton) and Seventh and Twentieth avenues.”

Several supervisors were in attendance for “an excellent literary and musical programme,” which included “‘Give Us Light in Sunset District,’ in which the need of electric-lights in the vicinity was poetically set forth.” The following February, Supervisors voted to extend streetlights from H to K (Lincoln to Kirkham) and from 12th to 16th avenues.

Emboldened by political success and steady increases in land values, the club’s next major proposal was to extend 19th Avenue from H Avenue to Ocean Avenue, creating “a level and scenic route” that would connect Golden Gate Park with Ingleside Racetrack, two of the city’s most popular recreation destinations. The Call reported that the roadway would be “secure from the rolling-sand nuisance” that can still close Great Highway today.

Creating this “belt line” would quickly boost property values in the Outside Lands, noted The Call, and “it would increase the attractiveness of San Francisco by adding to its picturesque drives.”

When the city’s charter changed to permit at-large voting for supervisors in 1900, neighborhood associations became more active and were regularly reported on post-earthquake, with The Call publishing associations’ scheduled meeting times and minutes.

The Sunset District Improvement Club continued to play a key role in attracting infrastructure investment and improving services for area residents into the 20th century. As more neighborhoods developed, new associations split off to serve the interests of their constituencies, eventually leaving the parent organization with far less power. Today, Inner Sunset Park Neighbors, Sunset Heights Association of Responsible People, and other organizations continue the tradition. 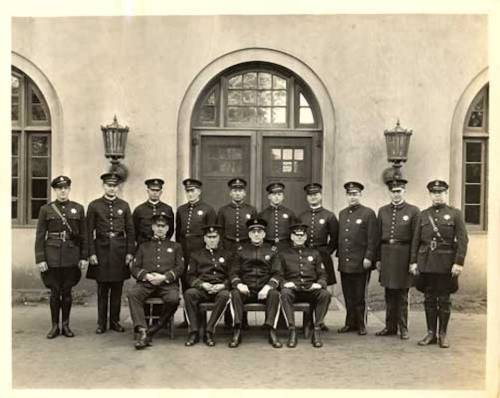 Our last look back at crime in the Inner Sunset focused on the grisly axe murder of butcher Egbert Annand, who died in his 9th Avenue shop at the hands of his delivery boy. Today, a roundup of stories from the meaner (and in many cases, unpaved) streets of the Inner Sunset from the early 20th century.

On July 23rd, 1905, The San Francisco Call reported that sisters Anne and Rose Flex appeared in Police Court. Anne was charged with “disturbing the peace of the Sunset district by ringing cow bells at late and unusual hours.” According to the report, this wasn’t the first trip to court for the Flex family, which “has been in the Police Courts before, charged with murdering sleep in the Sunset district.”

Rose Flex appeared to serve as her sister’s attorney, a legal strategy that was not well received by presiding Judge Fritz. After sister Rose “gave a sample of how she could argue,” he shouted for his bailiff to shut her down, stopping “what promised to be for the record a long distance oration in the Police Court.”

A different Police Court judge issued a warrant for the arrest of jeweler Joseph Gillis on January 5th, 1908. According to May McMurry of 1240 4th Ave., Gillis pawned a gold watch and a gold stick pin she had left with him for repairs.

Gillis was charged with felony embezzlement; adjusted for inflation, the $107.50 in goods he allegedly stole would be worth about $2,850 in 2015.

On August 12th, 1912, The Call reported that 12-year-old Jerome Crevas of 1708 Irving St. managed to escape from an “isolated shack” in Sutro Forest where two men and a woman held him hostage for several hours.

Crevas, the son of “one of the wealthiest Mexican merchants in Guaymas,” was playing in front of St. Anne’s Church at 14th & Irving on a Saturday afternoon when, “in full view of many people, a large, gray automobile pulled up to the curb.” A “well-dressed, middle-aged man” tossed Jerome in the rear of the vehicle before spiriting him past the almshouse (now Laguna Honda hospital) and “through the gate into Sutro forest.”

The kidnappers brought Jerome “to a lonely little shack hidden in a hollow” and locked him inside a small room. Once he realized that his captors left him alone, the boy crept through a window. “After an hour’s laborious walking,” Jerome emerged east of the present-day UCSF Parnassus campus, “ran down to the park police station and reported the kidnaping.”

Police visited the crime scene and verified Jerome’s story, but we weren’t able to find any follow-up reporting about the kidnap investigation.

On December 4th, 1913, the Sunset Improvement Club voted to create a committee to urge SFPD Chief White to step up police protection in what was then a rapidly-developing neighborhood that lobbied actively for better public services.

The organization, an influential group of affluent homeowners and merchants, was spurred to action by “six holdups two in broad daylight, last Friday evening, all within a radius of several blocks.” One of the robbery victims was Rev W.L. Stidger of Calvary Methodist Church. At the time of publication, SFPD detectives were still gathering “indefinite clews to the three masked highwayman who have committed six saloon holdups and two shootings” in the prior week.

Finally, a happy ending: the June 9th, 1950 edition of the The San Francisco News-Call Bulletin reported the good news that 2-year-old Linda Durand of 1737 Clayton St. was reunited with her mother at Park Station after police discovered her “wandering around at Haight and Clayton sts.” In the photo, Linda “tries on a policeman’s star, under Patrolman Brian McDonnell’s approving gaze.”

Now And Then: Picturing The Inner Sunset Of Yesteryear

Today, we turn back the clock to explore the Inner Sunset of years past through photos from the San Francisco Public Library that were plotted on a map by Old SF, a volunteer project created to expose the city’s history to a wider audience. (All of the vintage photos used in this article come courtesy of the San Francisco Library’s San Francisco History Center archive.)

Here’s a glimpse at some of the Inner Sunset scenes of yesterday, plus what each location looks like today:

Built in 1898, the first firehouse in the Inner Sunset is now the home of Ignatius Press, a Catholic publishing company. It stopped operating as a firehouse in 1962 before becoming a school in 1969; Ignatius Press purchased the building in 2008.

This sanctuary was built for Christ Lutheran Church, but it’s now home to St. John of God, a Catholic community. After outgrowing the space, Christ Lutheran’s congregation moved west to Quintara & 20th. In recent years, neighborhood groups have spearheaded efforts to underground utility lines to beautify the area.

Many Muni bus routes are named after the streetcar lines they replaced. To extend the original 6 line to Pacheco & 9th Avenue, a neighborhood group called the Upper Sunset Improvement Club worked to raise $20,000. According to a January 1912 article in The San Francisco Call, “the need of a streetcar line into the upper Sunset district is imperative.”

St. Anne was rebuilt after a partial collapse in 1935. The frieze above the front entrance was designed and sculpted by Sister Mary Justina, OP, who was born in Poland in 1879 as Anna Niemiesrski.

According to a 1959 article from the San Francisco Call, this photo depicts cars parked illegally on the sidewalk during a football game at Kezar Stadium, a few blocks away. According to the reporter, game day brought 40,00 vehicles into the neighborhood:

“Now, when you’re a football fan, that’s a convenient spot to live. Apart from the fact that you don’t need a car to take you to the game these days, junior can pick up a fast buck by squeezing a desperate spectator’s machine in your garage at a program parking rate…”