Straddling the border between Upper Haight and Cole Valley, Son Loy Laundry operated on Stanyan Street for more than 50 years. Since it closed several months ago, neighbors and passers-by have speculated about who’ll move into the 2,500 square feet commercial listing described as “wide open warehouse space.”

Yesterday, Hoodline learned that 784 Stanyan is coming off the market. According to Chris Homs, an agent with Lockehouse Retail Group, a new tenant is in the final stages of signing a lease. Homs wouldn’t say who’s moving in, but he said it won’t be a restaurant or a bar. “It’s a good local use,” said Homs, adding that his client already has a connection to the neighborhood. 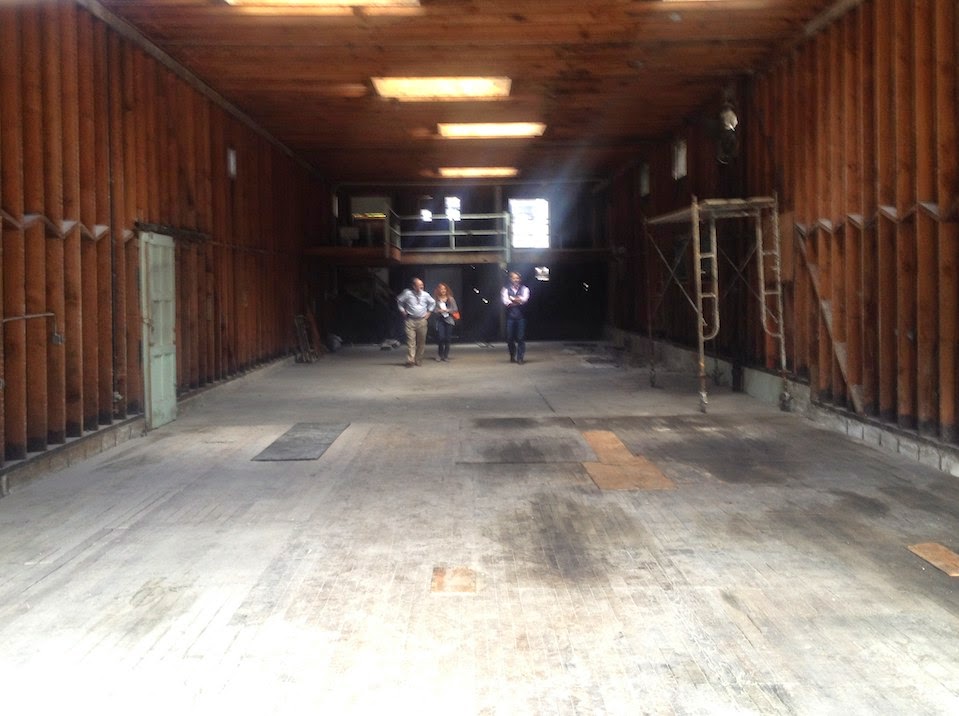 After the laundry closed, contractors stripped the building down to the studs. Several skylights brighten up the now-cavernous interior; with 15-foot ceilings and no support columns, the space could accommodate nearly any retailer or service provider.
Built in 1940, a  Sanborn map describes the building as a Japanese laundry, which jibes with a 1941 directory listing for Tomoyuki Nozawa at this address. Following the attack on Pearl Harbor in 1942, the US government deported or incarcerated many Japanese-Americans. In a sobering reminder of that dark chapter of American history, records from the Topaz War Relocation Center in Utah indicate that a Nozawa family from Upper Haight/Cole Valley was held there. SFPL
A 1942 directory lists a VP Beck as the operator of  a hand laundry at 784 Stanyan St. The following year, Starlight Laundry moved into the space, and by 1954, the operation was doing business as Forest Hill & Stanyan French Laundry.
In 1961, Son Loy Laundry moved from 315 Broderick St. to the Stanyan building. According to a 1915 summary of a Board of Supervisors meeting, Son Loy Laundry had received approval  to install a 6-horsepower boiler on Broderick way back in 1914, making it one of San Francisco’s oldest laundries by the time it closed.
A century later, neighbors are wondering about the new tenant. Julianne Walsh owns Green Pawz, an environmentally-friendly pet shop at 772 Stanyan. “I would like to see ideally a local restaurant,” she said. “Another place to go to and dine after work. This neighborhood could use some more options.”
Katy Hooks manages the front desk at Yoga Tree, next door to the former laundry. She’d like to see a coffee shop. “Yogis can always use some caffeine intake before and after class.”
Zoning requirements narrow down the mystery tenant’s options, as 784 Stanyan is inside a buffer zone that restricts new restaurants and check-cashing establishments. We’ll let you know when we learn more about the next occupant of the space.
Advertisement

(I’m hoping the City of Lancaster, CA can work things out with Huy Fong Foods before things get out of hand.)

Wearing bunny suits, a MIDDLE-AGED MAN and a KID IN HIS TWENTIES strain to lug the last sacks of chili, jalapeno + sugar inside. Except for shelves, the vehicle’s been stripped to the walls.

They don plastic hoods and pour the ingredients into a large cauldron. The younger man picks up a modified power drill with a blade at the end and uses it to liquefy the mixture.

A faint red mist creeps though an opened skylight before deepening into a crimson fog that billows out of the old RV.

By 6:20, we’d set up our tripods along the Embarcadero behind Waterbar and Epic Steakhouse. I’ve never patronized either place, but the views couldn’t be beat; we were standing a hundred or so yards from the westernmost tower of the Bay Bridge.

I arrived with a clear idea of the shot I wanted to get; foremost in my mind was capturing the the sunrise over the Oakland hills as the light glanced off Guardian, one of two SFFD fireboats. I pass this spot twice each weekday as my streetcar takes me to the train station. I can tell myself a thousand stories in the time it takes me to reach my desk each morning, so the city’s only wharfside fire station captured my imagination.

As I attached my POPA iPhone accessory to the tripod, a splash of color caught my eye; an aquamarine Chrysler New Yorker convertible coasted in off the Embarcadero and docked in front of the fire station.

The driver spoke to his passengers; a couple of middle-aged guys wearing Speedos and flannel shirts. Within a few minutes, about 15 more converged on our location, some in wetsuits, others wearing simple swimsuits and warmup gear. Everyone wore or carried yellow bathing caps.

Cynthia and I realized our postcard shot was being eclipsed by something much more spontaneous. One of the polar bears noticed me scanning his crowd with interest.

“I’ve lived here for 16 years,” I said, “but you guys definitely have my attention. This is much more interesting than the guy who unicycles to Caltrain.”

“Made you look!” he said, grinning.

I asked what I was watching; a woman wearing a tank suit and an insulated Gore-Tex robe explained that this was an annual swim event for the South End Rowing Club; they jump in the water near the Bay Bridge and swim north and west until coming ashore at their clubhouse just off Hyde Street at Aquatic Park.

By this point, most of the swimmers had converged on the fire station. They were about 60/40 male/female, ranging in age from about 40 to 75. Friends paired up for earnest conversations while a few stretched hamstrings against fences and benches. Others kept to themselves, rubbing hands together and looking silently out at the water.

A handful of sea kayaks and Zodiacs coasted parallel to the seawall and encircled the fireboat. An elderly woman on one of the inflatable motorboats called up to friends on shore who responded with a headcount.

“We got two more!” called out a near-naked man in his early fifties. I tried picturing him 24 hours from now as he munched on a bagel and read the Wall Street Journal next to me on Caltrain.

The older woman in the Zodiac waved her hand to acknowledge and jotted on a clipboard. By this time, I’d started mixing freely with the swimmers. I’d got as many shots of my fireboat as I needed, and I was starting to share their anticipation.

By 6:30, the swimmers were in front of the fire station, knocking on the door. Moments later, a sleepy fireman rolled the sliding door open and ushered everyone through. We walked through a gleaming firehouse to a cluttered pier where club members boarded my fireboat.

I stood midship as the swimmers swarmed the bow and jockeyed for position. Spotters in boats and kayaks shouted encouragement as the swimmers took turns leaping into San Francisco Bay. I looked over my shoulder at the city behind me and noticed that the arms and feet churning the water had momentarily drowned out the outboard engines.

Twenty-four swimmers moved like a pod of dolphins away from the boat. They had a multitude of styles and techniques, but the end result was the same: forward.

I found myself along on deck with a yawning fireman who looked like he wanted to get back in bed.

Cynthia and I drove to Aquatic Park to drink coffee and waited for the swimmers to arrive. We walked through the South End boathouse and staked out spots on the club’s tiny beach as we watched the line of swimmers cut a beeline through the breakwater and into Aquatic Park.

I felt that flutter of anticipation again, along with a flush of admiration for these strangers who’d decided to get up early on a Sunday morning to swim around downtown San Francisco. Watching them come ashore was slightly thrilling, even if some of them seemed slightly blasé about the outing.

“Hey, you look familiar,” said the guy who’d welcomed me to San Francisco about an hour before. He emerged from the water like a sardonic Venus on the half-shell, adjusting his tiny trunks and wiping away the grime that collected under his nose.

A tall woman who landed in the first wave stood next to me for a moment, watching the new arrivals. She fluttered her right hand at another woman who stood on a pier with a clipboard checking folks in: “I’m heading back out!” she said, walking casually back into the water. Clipboard woman shot her a thumbs-up and went back to her accounting.

Some days, it pays to get up early.